The rando race season is on

The last two weekends I have been able to compete in 2 ski mountaineering races; last weekend the Pebble Creek Rando Rally and yesterday the Wasatch Powderkeg. If you aren't sure what randonee (ski mountaineering) races are, they are the purest form of endurance suffering there is. They involve using you skis with climbing skins on them to climb up a mountain then skiing back down said mountain, and then repeat. Depending on the race you may repeat multiple times and maybe even strap your skis to a pack and bootpack up... awesome.
The Pebble Creek race is always a big one for me because it is on my home turf and I am somewhat protective of it, so when a bunch of guys (all of whom looked very fit and had the gear to prove that they were serious) showed up I was a little disheartened. I was glad to see some familiar faces like Zahan Billimoria, but at the same time I was certain that it was going to be a much faster race than I had anticipated. The 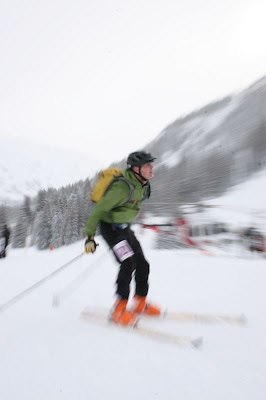 course at pebble is very steep, involves two climbs and is relatively short compared to other races. Most of the serious racers aren't really accustomed to the steep climbs so I knew I had that advantage. Right from the beginning we went out very fast and I was able to hold onto the lead until we hit the cat track were Zahan and Scott pulled ahead of me, the rest of the first climb I was redlined trying to make up the ground I had lost. The first transition went very well and the ski was quick. At the bottom once again I had problems getting one of my boot s into hike mode and Troy Barry from Driggs caught up to me as I struggled. The first half of the second climb is very steep, and I knew I had the advantage here because I regularly do interval workouts on the slope, I gained ground on Z and Scott Coldiron steadily and caught Scott right at the top. I could tell he was struggling and pushed as hard as I could to get the leg up, shortly after I passed him I couldn't hear anymore but didn't dare look back. Nearer the top of the second climb I sneaked a peak and saw Troy about 100 yards back but no Scott. I regained focus pushed hard to the top, quick transitioned and pulled into the finish just over a minute behind Z, Troy finished just 3 minutes later. Race stats 2200' of climbing and descent my time 39:56.
Yesterday was the Powderkeg... more on that later today
Posted by Luke at 8:47 PM