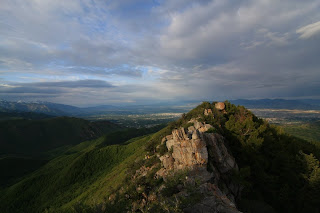 Near the top of the Crags- Photo Greg Norrander
This past weekend I made the trip to SLC for the Wahsatch Steeplechase, which is one of the top trail races I have done. The course is pretty tough- 4500' of climbing the first six miles and then all down hill from there. The highlight of the race for me is the section called the Crags which occurs pretty much at the top of the climb. The Crags are rated 5.4 and require some pretty quick thinking and solid route finding skills on order to maintain a quick pace. 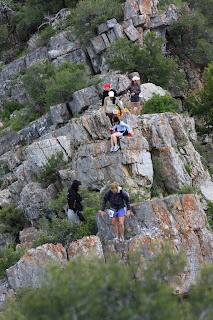 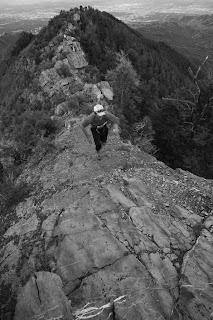 Great view of the Crags- Photo Greg Norrander
After coming out of the Crags there is a steep descent to the Smugglers notch aid station, and then a ripping descent down to City Creek that is steep and overgrown, where getting lost, tripping, and constantly struggling to stay on track is the theme. Once at City Creek it is a pretty mellow down hill that includes a little too much road and some sweet singletrack that leads back to the start finish area.
I have been struggling with minor injuries for a little over a month, which has caused my training load to be significantly less than I would like it to be and given the low training I had relatively low expectations going into the race. I decided to take an opportunity to work on race strategy- typically I go out too fast and just get cozy in the pain cave (not in the deep dark part of the cave, but more like in the entrance of the cave where you can hang out for a while). So, I decided to go out strong but conservative, my mantra was " be patient". I held on to the top 3 or 4 runners for the first 3 miles or so and then started to ease up just a little. The leaders pulled away but not too far. I keep an eye on the runners ahead of me as we cruised up the gorgeous ridgeline towards the crags, when the trail got really steep I backed off and powerhiked, which I would normally not do until I was forced to... but it paid off as I started to reel in the leaders. 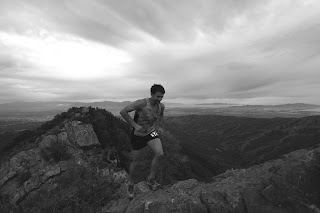 La Sportiva runner Jared Campbell happy to be on the Crags- Photo Greg Norrander
When we hit the Crags I was in 5th, but felt really good and started to push it, especially when it was very technical because I tend to be strong in the more difficult and technical terrain. I passed one runner about two thirds of the way through the Crags and decided it would be a good time to turn it up a notch. 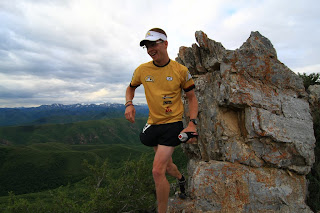 Me-very happy to be running- Photo Greg Norrander
I felt very good as I passed the very friendly aid station folks and started the steep descent with a smile on my face. I have been working on downhill running a lot, since I feel weaker in that area, and that training has been paying off. I was able to just let my legs roll through the steep descents down to the City Creek Trail. 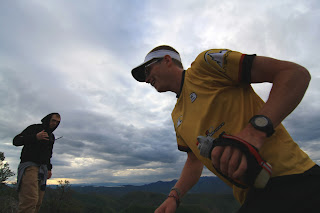 Almost to Smuggler's Notch- Photo Greg Norrander
At the aid station at the bottom the volunteers said I was in third, weird because I didn't pass anyone on the descent, but that section of the trail is very overgrown and it is quite easy to get off the trail and disoriented in the thick brush. Since I now had a shot at getting on the podium I figured it would be a good time to get into the cave and push, I felt solid as I leaned forward, increased turnover and let gravity pull me down the gentle grade of the road, yet I eagerly looked forward to getting off the road and back on the singletrack.
Appearantly I had entered the cave a little to aggresively and found that I was becoming sloppy with my foot work on the trail, very uncharacteristic for me. Moments later I hooked my left toe on a rock and immediatly had to revert to the years of imaginary Army training I had as a kid by throwing a flying somersault roll mid-stride. I was suprised how quickly I was back on my feet and running with very minor damage- a little trail rash on my left knee and a couple of blown up gels in my Ultimate Direction FastDraw hand bottle. I scolded myself for not paying attention and put my focus and clean, relaxed turnover and good footwork/placement. I rolled into the finish area with a time of 2:26 and some change, and good enough for third place. Appearantly the battle for first was pretty intense as Evan Honeyfield and Fitz Van De Kamp ran the last 7 or so miles shoulder to shoulder, with Evan pulling away to win by 20 secs finishing in 2:19:42. I guess my own time would have been faster if I had some company, but I ran the last 11 miles or so all alone.
Overall I was very happy with this years Steeplechase and highly recommend this race to anyone who loves running in the mountains! 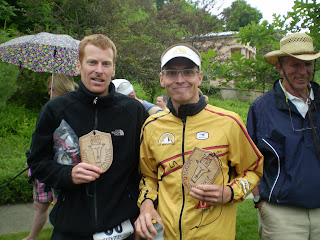 Winner Evan Honeyfield and Myself- Photo Tanae Nelson
Posted by Luke at 8:56 AM