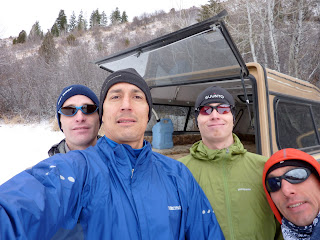 A good friend of mine, Dusty Peña, turned 40 this past week. Several months ago he hatched the idea that for his 40th he wanted to run 40 miles. As the time approached we worked on a couple of routes that might be possible in late November, and crossed our fingers that the weather would cooperate. Two weeks out Dusty was running a local road half marathon and aggravated an old calf injury forcing him to drop at mile 8. This was a major blow to the 40 for 40 plan. He was pretty determined to still get it done, he got several massages and did lots of stretching. Then the weather turned its head, the forecast called for beautiful weather until the day we had planned, then it dropped 20 degrees and called for wind and snow. Two nights before Dusty called and we committed that no matter what we were going to at least try on Saturday morning. 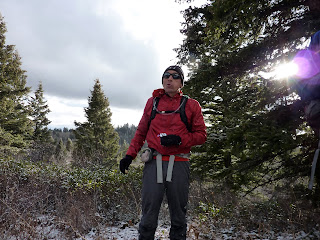 Just as called for we woke up to 26 degrees, wind and a light snow. Undeterred we met at Dusty's house at 8:00 ready to give it a go. Sheridan, a local runner who ran a lot with us this summer, drove straight from working all night to the house stoked to run his first ultra. We met Aaron Spurlock, an solid 100 mile runner from Pocatello, at the trail head. After a few minutes of trying to decide exactly what to wear for the first 20 miles we snapped the mandatory pre-run photo and headed off. 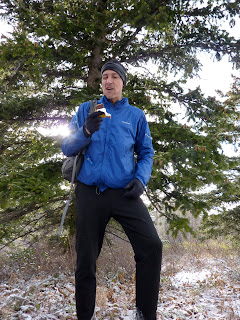 As soon as we hit the trail we were running in snow, as it would turn out about 37 of the 40 miles would be covered in at least 2 inches of snow, at times up to 8. We moved along in good spirits enjoying each others company, the weather has mellowed some, it had mostly stopped snowing, wind wasn't too strong and it warmed to maybe just above freezing. About 6 miles into the run we ran through the high point for the day, Scout Mountain, it was pretty cold and windy up high but didn't last long as we descended into the trees and lower elevations. Before we knew it we ticked off the first 20 and were back at the car. Dusty's family was there with hot broth and cider to warm us up before the second half. Most of us also switched into dry clothes/shoes while enjoying this very well stocked aid station. Todd Packer also came up to run the second half with us and right before Aaron Spurlock froze we left. 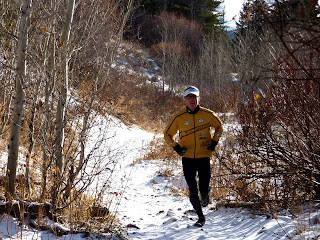 We were welcomed to the second half of our run by the sounds of gunshots unnervingly close as we trudged up some of the only dry single track of the day. During this section of the run the wheels started to come off the bus for Sheridan, who hadn't slept all night, and Dusty was in kind of a bad place as well. We knocked the pace back a little and continued moving forward so we wouldn't get hypothermic. We came across some very fresh cougar tracks in the snow which helped keep the "herd" close together, no one, after all , wanted to be cougarbait. The group splintered just a little on the final descent because it was starting to get dark and no one wanted to get be-nighted. We finished in 8:43 just before dark, in total we climbed 9000 feet and descended 9300. It was Dusty and Sheridan's new PR for distance and a great run for all. Happy 40th Dusty and thanks for having a big birthday so we had a good excuse to run a long ways.
Posted by Luke at 12:28 PM