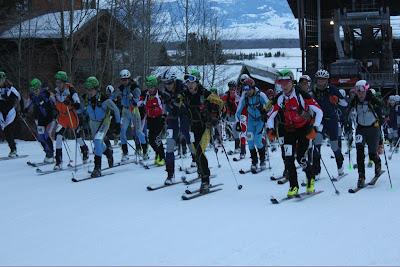 Start of 2012 US Champs
With winter being absent in most of the western US, I think there was a lot of uncertainty going into this years US Ski Mountaineering Championships. Training, for me at least, was very challenging due to the limited snowpack. For many of the racers it would also be the first race of the year, which also added to the unknown. This year's race had a larger field than last year, and certainly a deeper field both on the men's and women's side of the race. Not only were there a lot of fast looking folks lined up at the start there was a bunch more super light race gear and speed suits than I have seen at a US race. At that point I knew for sure it was going to be a barnburner!

In typical fashion the first few minutes after the start were spent getting deeply anaerobic, but the pace did relax (slightly) as the field started break up a little. I found myself in third, about 200 feet behind Marshal and Scott Simmons who were setting a blistering pace out front. By the time we hit the 1st transition I had moved up on Marshal a little but Scott was skiing out of the transition zone as I came in. He had a 30-40 second lead. The first descent was pretty rocky at the top, but skied relatively well. Bryan Wickenhauser caught me in the descent as I was skiing a little timidly. I pulled into the transition right behind him, Scott again was just finishing his transition and skinning away.  The next climb I pushed hard to try to gain in Scott and put some ground on Wick and Marshal, but I don't think I accomplished much of either. The second descent was a bit dicey at top, but like the previous was very skiable as we got further down. Scott had already left the transition when I got there, he was hammering! I pulled out of the transition just ahead of Wick and there was a good size group of racers finishing the descent as I started skinning towards the gondola. Yet, even pushing at red line I wasn't gaining on Scott. I worked on fueling a bit, hitting the First Endurance Slurry that worked so well during ultra racing this past summer.

When I hit the boot pack I found the extra gear I had been trying to get all day, I finally started to make up some ground on Scott and actually caught up to him as we topped out. I tried to stay close as we traversed Pepi's bench, but again he pulled away a little. As we worked our way around under Corbet's I gained just slightly hoping to get to the boot transition at the same time. Scott left the boot transition a second or two ahead but I was able to reel him in, he graciously let me pass and I set to work at building a little bit of a lead. Seeing my dad, wife and best friend James at the top of the booter added a bit of pep to my tired legs, I left the top transition about a minute or so ahead of Scott.  The long decent down from the top was surprisingly skiable, but took its toll on my weak ski legs. The lack of snow has been ok for uphill training but I haven't had any race pace downhill skiing yet this season. Scott caught me at the bottom and we skied into the transition together. I hit a solid transition and pulled out just ahead of Scott. I knew this was the last chance to get ahead so I fully buried myself in the deep recesses of the pain cave to pull away from Scott, when I hit the top of the last climb I had about a minute lead. I charged down the final descent hoping to not get caught. 2:38:58 after the start of the race I crossed the finish as the 2012 US Ski Mountaineering Champion. Elation is probably what best describes how I felt.

The entire race I battled with Scott, he raced so very well and I can't help but feel so humbled that in the end I was able to sneak away for the win.

There were so many strong racers in the field, including a handful of new faces. My LaSportiva Teammate Sari Anderson also had a stellar race to claim the women's National Title, and I have to point out an impressive performance by Jason Dorais for 3rd place, who even after having skin issues on the first climb came back to capture the last podium spot. One more racer I have to point out is young gun Micah Thatcher, who at 15 years old finished in under 4 hours with only 1 day of skinning prior to the race, look out for him charging to the top in the next few years. Finally here's a nod to my friend Toph White for sticking to it even when it got tough, strong work buddy!

As always Forest Dramis and his incredible crew of volunteers put on a solid race. Thanks! Also thanks to Jackson Hole Mountain Resort for providing us the chance to invade the mountain for a day, to OR and the other race sponsors for helping make it all happen. I need to thank La Sportiva for making such incredible gear, it truly gives an edge over the rest. Last but definitely not least thanks to my mom and dad, beautiful wife, and my daughters Chloe and Brynlee for supporting me through all the training and simply believing in me.


Awesome video from the race!