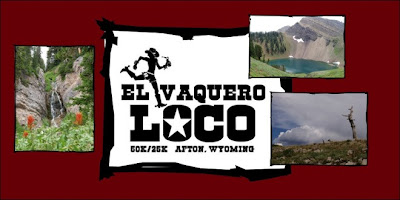 5 years ago I ran my first ultramarathon, El Vaquero Loco.  I signed up for the race because I saw that the RD offered hoodies instead of t-shirts, seriously that's why I signed up.  During that race I found out a few things about running ultra's. First is that running 50k is really far, so often in ultra-running we lose perspective and begin to discount the shorter races, we shouldn't do that.  32 miles is a long way to run.  The second thing that I learned in that race is that when you run it can be pretty painful, and your toenails might fall off.  After that race 5 years ago 8 toenails fell off.  One last thing I learned is that running an ultra is one of the most rewarding things that you can do.  It bundles a ton of emotion together throughout the run; fear, joy, pain, success, pride, humility, relief, fun.  There are not many other activities that can be such a roller coaster as running an ultra.

Fast forward 5 amazing years that have involved thousands of training miles, lots of races and an even deeper love for ultra-running than ever before and you'll find my toeing the line at the 2012 El Vaquero Loco 50k.  The line that I toed that morning was drawn in the dirt, cowboy style, and with minimal fanfare Ty Draney sends the 50k'ers out into the barely lit morning.  For the first time in 5 years of racing the Vaquero I still have company after the first 10 minutes.  I tend to race the first part of the course really hard to distance myself from the pack.  You see, the first 4 miles of the race climb a couple thousand vertical feet and that's where I feel strong.  Well on Saturday Morning Joe Furse, a speedy guy from Logan Utah, put himself into my back pocket and pushed my and the pace all the way to the top of Ball's pass.  When we crested the pass 47 minutes into the race I mumbled something about how fast we were moving, he agreed, but did not relent.


I stayed out front, fearful that if I let him lead I wouldn't be able to keep with him, and pushed the pace to the far edge of comfortable, border lining on uncomfortable.  We greeted the first aid station volunteers less than an hour after starting the race and pushed through without taking any aid.  We continued this rapid pace past Fast Evan Honeyfield, who had set out early to take pictures, past the volunteers at the Corral Lakes aid station and up and over the two grunts of climbs out of the lakes.  When we crested and began the descent towards Swift Creek I told Joe I thought our pace was suicide, he agreed and we accelerated down the hill.  The cowboys at the 3rd aid station threw out a few howdy's as we hammered past.  Every now and then I would glance on my watch, each time noting how much faster we passed certain landmarks.  It was quite obvious we were on course record pace, but I was leery of what the later part of the race would bring due to our very aggressive pace.


We rolled into the aid station 2:20:00 into the race, 8 minutes faster than my CR split from two years ago.  (In 2011 the course was altered because of deep snow and bridge washouts- I had set a CR on the altered course but the CR for the full course 5:12:41 was set in 2010). I made quick work of swapping out 10 oz slurry bottles and headed out slightly ahead of Joe.  I needed a little time so I could pull off the trail and pee without getting dropped.  I just finished relieving myself when Joe rounded the corner and we began the retracing our steps.  I was surprised how good my legs felt as we ascended the awkward grade up Swiftcreek.  It is just steep enough that it is taxing to run, but not so steep that power hiking seems appropriate. About a mile out of the turnaround Joe dropped back a few feet, he mentioned that his stomach was acting up.  I tried to reassure him that it would pass, and told him to hang on as we continued to grind uphill.  Joe stayed right with me for about another mile when he started to drop off again.  I told him to hang in there, I kept the same pace and a few minutes later looked back to make sure he was still with me but Joe was nowhere in sight.


It was bittersweet to not have Joe with me anymore.  I was very glad that he had been helping push the pace, but I was also somewhat relieved to not have him breathing down my neck.  I knew that at any minute he could come charging back, particularly if I had a low spot, so I kept the hammer down and began a race with the clock.  Before the race I had confided in Ty that I would really like to crack 5 hours, I felt like my fitness was there and I tend to be overly optimistic most of the time so it made sense to shoot for really fast time.  I tried to work out splits that I would need to hit in order to make the sub-5 goal, but my math skills weren't as sharp as they needed to be after several hours of hard running.  I stopped at the aid station run by the cowboys and slammed half of a coke, and then really concentrated on pushing up to the lakes.  Then a 25k racer caught me.  I was blown away! I left 8 minutes before the 25k start, had been moving well, and this guy catches me just over 5 miles into his race.  I made a concerted effort to stay with him, but he put about 200 ft on me rather quickly and I knew he was gone.

I would catch glimpses of the 25k super star now and then as I continued to push myself through the undulations of the middle portion of the Vaquero course.  The volunteers at Corral Lakes have to backpack in, and thus they didn't have any Coke (which I desperately wanted), so I pushed on past their aid station hoping the last aid would have some dark syrupy caffeinated goodness. I didn't want to take any extra time to fill my now nearly empty hydration bladder so I sipped at the stream crossings as I worked my way towards Balls Pass.  Thankfully the aid station had Pepsi Throwback, I instructed the volunteer to "crack one and walk with me".  He walked along side of me as I slammed about half of the can of cola-y goodness.  I passed him the half-empty can with a thank you and promptly buried myself as I tried to run up Balls.  I managed to run about 70% of the climb with only short power-hiking breaks to get my heart rate down out of the stratosphere.


I topped Balls pass at 4:35:00.  I had 25 minutes to descend 4 miles to the finish.  It was going to be really tight to break 5 hours.  I battled myself throughout the entire descent.  As I topped Balls I glanced back and there was only 1 runner in sight behind me, it wasn't Joe and I had at least a 10 minute lead. My rational brain kept telling me to back off the pace, be satisfied with winning, my irrational overly optimistic brain kept the pedal to the metal as I recklessly descended the loose rocky trail.  Whenever I could safely, I glanced at my watch, and uncertainty continued to build.  I did start to see the 25k super star getting closer to me, which kept me fired up.  I pulled off the single track into the campground 25 feet behind the 25k leader in 4:56:55.  I yelled at him to put the hammer down because I needed a pacer to lead me the last 1/4 of a mile to the finish.  He responded and I chased him in a dead sprint through the campground.  He crossed the finish 5 or so feet in front of me and I crossed in 4:59:35.  I couldn't believe that I managed to finish the race as strong as I did, and was pretty much amazed that I snuck under the 5 hour mark.

We spent the rest of the day hanging out at the finish, soaking intermittently in the lake, eating hamburgers, drinking Huckleberry sodas, and helping Ty at the finish line.  Our girls played until they were totally exhausted, so did our dog Pedro.  I couldn't think of much better place to spend a Saturday then at the finish line of El Vaquero, hanging out with family and friends.  There were so many inspiring performances that day and almost everyone finished the race commenting on the beauty of the course and how they couldn't wait to come back next year. Cody Draper from Logan finished 2nd in the 50k with a 2 minute PR.  His friend and training partner Joe, who had run so well in the first half of the race ended up with severe stomach issues and wisely pulled the plug about 5 miles into the second half of the race. I look forward to reading his blog post soon here.


Ty has a great tradition of giving a belt buckle to 5 year 50k finishers, I was super stoked to receive mine this year and promptly put it on a belt and rocked it. I was only able to wear it for about 45 minutes before I began to get hip fatigue and buckleitis, but I am in training now to be able to rock it for a full rodeo in the near future.  I am already excited to get back on the Vaquero course next year and hope that you'll come out for a good time in the Salt River Range next August.


My results for the last 5 years at El Vaquero

Gear: It is interesting to note that I have been training all summer for UTMB in France.  The race requires mandatory gear and as a test I raced this year's Vaquero with all of the gear.


First Endurance pre-race (3 caps before and 1 every hour)


First Endurance Slurry (4 oz EFS LS, with 2 scoops EFS in 10 oz bottle) 1 for each half of the race

First Endurance LS- 1 flask for each half of the race


First Endurance Ultragen- after the race for recovery.  I was able to share Ultragen with a lot of runners after the race, which was super cool to share this important recovery tool with them!