Getting Lost in Peru


I can feel my heartbeat pounding in my head, my breathing is fast and labored, and my pace clearly isn't as fast as it should be given the effort it is requiring. A little over two hours into the run I admit to myself that I am not on the route that I was planning on taking.  I am lost, sort of...


Four days prior I had had left SLC with a large group of medical and dental providers all bound for Peru.  I have actually made this pilgrimage every spring for four years now.  The group I am part of, Idaho Condor, takes a group to the highlands of Peru every spring to offer medical and dental care to a very special people living in and around the Sacred Valley outside of Cusco, Peru.  I love being able to go every spring to provide medical care and to get in some high altitude training to kick off ultra-season. Cusco sits at a little over 10,000' and it is quite easy to get up to and stay above 12 or 13,000' feet for an long period of time.  It is also hard work.

During this trip I had set a couple of slightly more ambitious goals than I had in the past in regards to running while in Peru.  One of them included running from Cusco to Chincheros via the mountain range that separated them.  I had spoke to several people who all thought it could be done, and had made contact with two people who have completed the traverse.  I went as far as buying a map, not a topo map since that proved pretty much impossible to locate.  The map I bought did have some trails and all of the roads that could be traveled to link the two cities.  We held a half day clinic Wednesday morning and at 1:30 pm I set out on what was estimated to be a 4-5 hour run.

The first part of the run went without incident as I climbed from the Plaza in the center of Cusco, past the ruins of Saksywaman, and into the mountains that form the Northern Cusco Skyline.  I have gone on many shorter runs into this area and felt confident in finding the correct saddle and trail that would lead me through the crux of the route.  The altitude always slows things down a little for me, and considering I had only been living at 10,000' for three days, I was pushing on all cylinders to simply run up hill. When I finally arrived at the saddle and got my first look at the next portion of the run, I immediately got quite nervous.  The mountains in front of me were large, with massive relief between the ridges and valleys.  I was standing at 12,700' and in front of me was an enormous chasm, flanked on the far side by a peak that extended much higher than my vantage point.  I could not make out any villages or other landmarks that were on my very helpful map. The trail I had followed up to that point contoured to the east ( off to my right) and I couldn't see any other trails going to the north or the west, the direction I thought I needed to be heading.
In one conversation I had about the route I was told that I needed to go left at every intersection that I came to and that would lead me to my destination.  I quickly justified that this technically wasn't an intersection because there were no other trails, and without further debate I started to run again.  The trail was amazing! A pencil thin single track pasted on the high flanks of an Andean mountain.  It contoured around without gaining much more elevation and I finally felt like I could run at a decent pace.  About 45 minutes later I noticed a small village in the valley below.  I consulted my map and was a little confused about the location of the village.  It's location didn't fit with where I thought I was, it was also a long ways down to the village, maybe 2500' descent. It was 3:45.

After some internal debate I decided to continue on for another 15 minutes to see if I could get to a better vantage point.  40 minutes later I finally admitted to myself that I was going the wrong way, but I wasn't even sure which wrong way I was on.  The small villages that I occasionally spotted didn't match at all with the map, and they were so committingly far away that to descend to one would be going all-in- a full commitment to that location.

It was very exhilarating to be lost.  I knew that I had a headlamp, some gels and enough clothing to be out until I relocated myself.  I resolved to simply run until I ran into someone (not too likely), I arrived at a village, or I could make sense of my location and pick a new route. I was completely free;  no route, no destination, no specific time to arrive.  Yet, I was nervous at the same time; this could end up being very epic. At a few minutes after 5, I came across a shepherd who spoke a little Spanish and was able to explain that I had in fact should have gone left at the saddle and that my current trajectory would lead me deep into the Sacred Valley.  He recommended a slight alteration to my route which would loop me back to the highway, which I could then follow back to Cusco.

By following my new friend's directions I was quickly able to "find" myself and work my way back towards civilization.  I ran down the final pathway and paused at the top of the stairs that would lead back to my hotel just as it got dark enough to consider pulling my headlamp out of my pack. I was relieved that the adventure had turned out so well and not in the least disappointed that I hadn't made it to my original destination.  The journey into the unknown and mishaps along the way had provided a much richer experience than if things had gone according to plan. 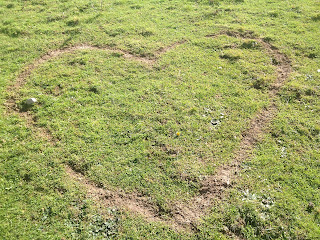