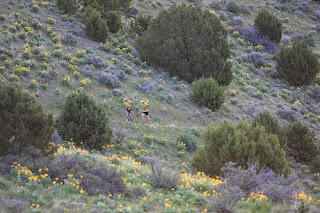 Tom Borschel and Myself pulling out front on the first leg- Photo by Greg Norrander
Well a couple of days have passed since the inaugural Pocatello 50, I am still digesting the race and all that I learned from my first 50 mile ultra. Before I explain my experience at the race, I want to recognize the excellent work done by race directors Ryan Mcdermott and Jared Campbell. As the pre-race preparations began to unfold the day before the race, it became blatantly obvious the amount of work that they had put into the race, down to the last detail the race ran extremely smooth- great work guys, thanks!
The Pocatello 50 is not an easy 50 mile race, Jared Campbell said at the pre-race meeting "you are going to earn a finish in this race". The 50 miles gains 13,500 ft of elevation, loses that same amount and was broken into 3 legs which could be ran as relay teams or one big loop if you felt up to the challenge. I felt quite a bit of pressure going into this race mostly because it was held in my backyard , on trails that I train on every day. I had received lots of good advice about being patient and holding back at the beginning, as well as fuel and drink plenty early. As we all know advice is only good if it is implemented; I tried to heed the advice but in the end went out to fast and did not fuel enough. I put the first leg to bed rather quickly and minimized time at the aid station. 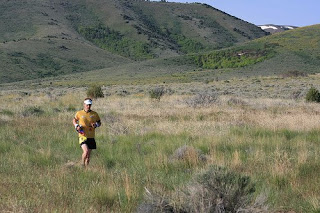 Coming into the City Creek aid station, end of leg 1-photo Greg Norrander
Shortly after the aid station I entered a "dark place", not a dark place literally but mentally. I had not kept up enough on electrolytes and bonked harder than I have ever bonked before. Instead of holding the pace I had intended for the second leg the wheels came of the bus and I ended up walking for around 6 miles. In the midst of the darkness I was experiencing I was considering dropping out to end the suffering. That is when Mike from Park City saved my day, he caught me and gave me a couple of S-caps. It didn't turn things around immediately but about 45 minutes later I was running again. The second leg finally came to an end and I had started to feel much better. At the aid station I ate quite a bit of food, drank a red bull and some coke. I also drank a whole bottle of First Endurance EFS drink which really brought me back to the race. I left the aid station with renewed drive to finish the course and run well, I did still have 20 miles to go and the biggest climb of the race over Scout Mountain. 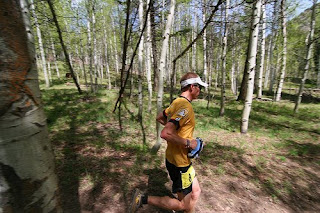 Just before the end of the second leg- photo Greg Norrander
Due to the large amount of food that I consumed at the aid station I wasn't able to run really fast but felt pretty good moving along. About 3 miles up the trail I caught up to ultra-running legend Krissy Moehl, we worked together for the rest of the race to keep each other moving and positive. Krissy pulled me along for some of the tough sections and I like to think that maybe I pulled her along some as well. One of the highlights of the race was the glissade off the top of scout mountain that cooled the legs and sped up the pace at the same time. Krissy and I crossed the finish line at 10:13, good enough for 4th overall. David James one the race with a time of 9:16. The times clearly show the difficulty of the course. (results here)
In the last couple of days I have reflected a lot on the race as I work the soreness out of my legs, I can clearly see where I made mistakes in not fueling enough early and going a little too fast in the first 17 miles of the course. I also learned that in a race that long you can feel great, real bad, and then recover to still have a good race. I am very grateful for my wife who worked as my crew during the race, to Mike for bailing me out when I needed it most, and for Krissy for helping me finish strong. It was a wonderful race, well done Jared and Ryan, I can't wait for next year! As I get photos loaded to my computer I will try to add some additional updates.
Gear Used:
Shoes: La Sportiva Crosslite
Socks: DeFeet Trail 19
Shirt: Sugoi Shirt (La Sportiva Kit)
Misc: Headsweats La Sportiva Visor, Ultimate Direction Fast Draw Plus, First Endurance EFS (grape flavor) drink. Look for reviews on most of these products coming soon.
Posted by Luke at 8:29 AM