It has been a while since I posted, I guess racing 4 weekends in a row caught up to me and I have just been extra short on time. A lot has happened since I last posted I will try to break it into short paragraphs instead of individual reports: 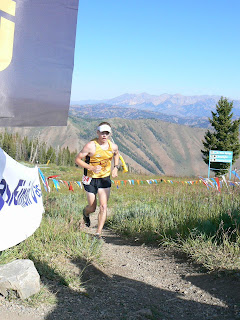 Me just before the finish line at the top of Sun Valley- Photo Mike Newby
First- two weeks ago I raced in the last of the La Sportiva Mountain Cup Races- The Shop to the Top in Sun Valley. Similarly to Jupiter Peak the competition was stout and the race was tough. This one involved about 3000' of climbing from the Elephant's Perch store in town- a flat mile road mile to start it off and then all the climbing in 5 miles to the top of Baldy Mountain, aka the summit of Sun Valley Ski Resort. I was still feeling the effort from the week before at El Vaquero Loco, and knew that I would be lucky to get top ten, especially when considering the local Valley talent on top of the runners traveling in to solidify winnings in the cup. The race started super fast with the leaders running a sub 5 minute first mile, I ran it in about 5:04, once we hit the dirt I tried to open it up and hammer on the first climbs to distance myself from some of the pack, it worked I went from 6th to 3rd where I stayed for another mile or so until I was passed by Wray Landon, then a little later Bernie Boetcher, then Brad Mitchell, putting me into 6th. The spacing between Bernie, Brad, Wray, and I was about the same, just close enough to occasionally see the person in front, not close enough to be able to close easily, and not far enough ahead of the person behind to feel comfortable about your lead. That spacing was a recipe for suffering. I kept trying to surge to catch Wray, and stay ahead of Kevin? who was just insight behind me. I was able to hold on to 6th, Simon Guttierez won, Matt Byrne 2nd, Bernie 3rd, Brad Mitchell 4th, Wray 5th. The first two broke the 9 year old course record by an olympic runner, and I managed to finish in 1:01:33, about 8 minutes back from Simon. After all the racing in the last month I felt very happy with that finish. 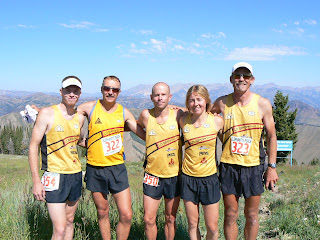 La Sportiva Team Shot after the Shop to the Top- Photo Mike Newby
Since the Shop to the Top I have been pouring my focus into getting ready for the Bear 100 in September, I have tried to increase distances, slow down the pace, and do more back to back long runs to get used to running fatigued. I really have no idea what I am doing, but hopefully it works out. I did a night trail run using a custom Black Diamond Icon which I plan on using for the race, the light is freaking awesome, but night running is scary even with a super bright light. I ran a local very well used trail, but I ran it alone at around 11 pm, I am a grown man but man I am scared of the dark- I put down my second fastest time ever on that 6 mile loop just because I was afraid the whole time. I also had another epic this weekend while doing a long run in prep for the race. I set my sights on a local ATV trail called the Boundary Trail, I figured it would be a fairly moderate 30 mile run, and that is what I was ready for when I left my truck at 6:30 am on sat, I had about a liter and half of water with Banananuun in my new Ultimate Direction Wasp running vest, a flask of First Endurance Gel, and a Probar. Well it turns out the trail is very loose, has a lot of climbing: 10,500' ascent and the same of descent, and is just a tenth of a mile short of 40 miles (I was also using a gps trying it out before the Bear- I heard it might be extra useful with the way the course is marked). Needless to say, I didn't have enough water, food, or mental prep ready for that big of a day. Thankfully I was able to get water at a campground at about mile 22 (after drinking out of a couple of very questionable streams) and was able to limp it in, in just under 8 hours. It pretty much wrecked me for a day or two but after some recovery I feel like it might have been a good thing to do after all.
Stay tuned over the next week for some exciting announcements, some product reviews, and more info on my prep for the Bear!
Posted by Luke at 9:29 PM