I finally have found a few moments to put together this race report. After this past weekend of racing things have been crazy. Its been a busy week at work, I had a ski patrol training, a couple of meetings for Idaho Condor, and I have been trying to get things ready for a trip to Italy in a few weeks.
Some of you reading this may be not really have any idea what Ski Mountaineering Racing is. In a nutshell you climb up mountains with your skis on your feet (with the help of climbing skins) and when you get up there a ways you take the skins of, lock your boots and ski down. Then, repeat. Below is the course map to the US Championships race which took place on Saturday. It turned out to have around 7800' of vertical ascent and pretty much the same descent. 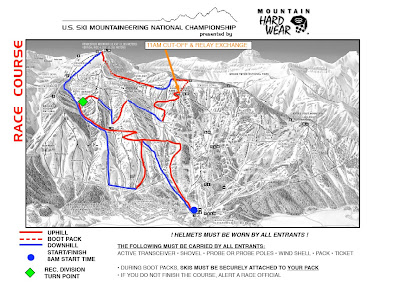 Going into the race I was feeling pretty good. I was well rested, injury free and had put together a pretty solid block of training. Although I felt good I was very nervous, I wanted to qualify to go to Italy very badly, but I knew that the competition would be very fierce. From past experience in the few races that I have done I was certain that to finish any where near the top would require a prefect day. 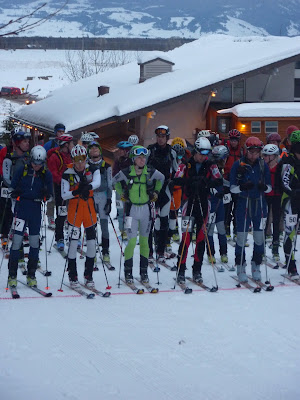 After an uneventful trip to Jackson from Driggs, I got checked in and went outside to warm-up for the dance. Normally I can get a really good idea of how things are going to go during a race within the first few minutes of a warm-up, Saturday was different. My body felt good but didn't seem really peppy, I was able to easily knock out a few short hard sprints, though I felt a bit off. Nerves were quite high as a tremendous amount of lycra lined up at the line drawn in the snow, I did my best to keep my mind clear and calm.
The countdown...3.2.1..and we all charged off of the line, immediately I caught myself and forced myself to pull back. There is always a mad dash at the beginning but getting caught up in it can lead to blowing up far too early in the race. I settled in the middle to back of the lead pack. The pace at this point felt strangely easy, something I could surely maintain. Without increasing pace too much I found myself in about 5th as we hit the 1st transition. I made a quick transition to DH mode and hopped out of the transition in to the Alta Chute in 1st. Within a couple of turns I realized that I had left my ski legs back in Pocatello as I floundered my way down the steep chute, I crashed, lost several places to skiers having a better descent, then collected myself and charged on to the next transition.
Again I had a quick transition and pulled out right behind Brandon and Reiner, the second climb went by quite quickly and once again I found myself struggling to ski well as we descended the Tower 3 chute. Again we transitioned, this time I found myself in 4th, right behind Pete Swenson (past national champion), and I figured I was in a good place tuck in and follow his pace for a bit. The large lead pack had kind of broken up, but nearly all pack was strung out within a few seconds of the racer ahead an behind. Again the climb seemed short as we hit the top of the Gondola, and transitioned to the 1st of 2 bootpacks. I held onto my 4th place, this time right behind Reiner.
The pace up the bootpack seemed very easy, "too easy" I thought to myself several times and I began to plot some strategy for the next booter. At the top of the booter I tucked in behind Brandon, Reiner and Pete for a short traverse and speedy descent down the Coombs Chute. As we transitioned to uphill I made my move and pulled out first into Tensleep bowl on the way to the infamous Corbet's Couloir. 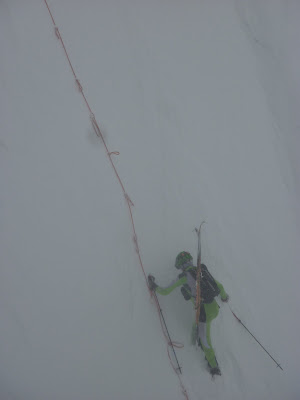 You see my plan at this point was to skin hard to the base of the booter up Corbet's hammer the climb and hopefully buy myself a bit of a lead for the big descent. I felt I needed a lead at this point to stay in the top 5 due to my poor skiing skills of the day. Things worked out just as I planned and as I started hammering up the booter I began to distance myself from the lead pack. I had probably gained 20 seconds or so until just before the bottom of the aluminum ladder that climbs the final 6o feet of Corbet's. 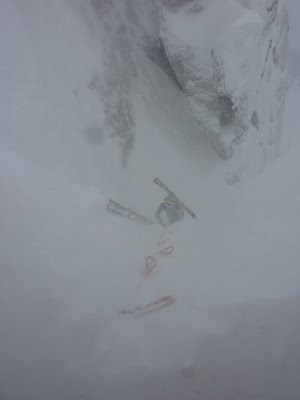 I struggled for a few seconds to get onto the ladder, then rallied up as fast as I could, I tried my best not to squander the small lead as I skinned the last bit to Corbet's Cabin at the top of Teton Village and I managed to tranisition and head out as Pete, Brandon and Reiner were pulling in. 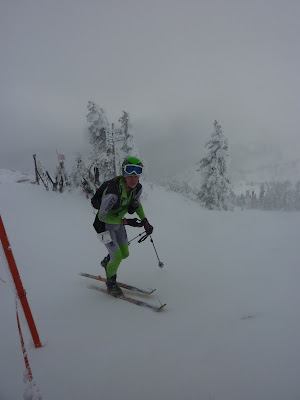 The DH went pretty well, all things considered. My legs felt pretty trashed so I tried to conserve energy as much as possible while skiing just beyond the edge of control. Pete and Reiner past me on a straight line groomer and Brandon (I think that was the order at least) past me in the icy bumps nearer the bottom. Everyone was still in the transition as I rolled in and after a quick change I managed to leave in 3rd behind Brandon and Reiner with Pete hot on my heels. After a few minutes of ascent I had a skin start to fail, my heart sunk this could blow the whole race, but I kept my composure, scraped the snow off and put my head down to catch back up. About 3/4 of the way up the final climb I past Pete and held him off to the transition. Just as I pulled into the transition, Reiner left in the lead. Brandon left right on his tail and I left a few seconds back. I pulled out all the stops on the final descent to make up ground and hold onto 3rd place. I wasn't able to catch anyone, but I didn't get caught either. 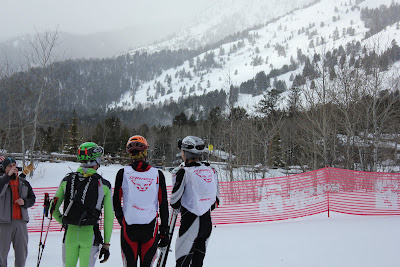 The three of us posed for a picture by the Race Organizer, and threw a round of high fives as the rest of the competitors started rolling in. It took a few minutes but it started to set in that I had managed to not only qualify for Italy but was able to finish second US racer only 32 seconds behind the new national champion Brandon French. Reiner had finished first a few seconds ahead of Brandon, but since he is Canadian he can't be the US champ or be on the US team. 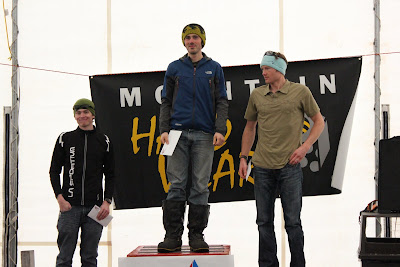 I continue to be blown away with how well things went during the race and even as I write this am still totally out of my mind with excitement. After the awards we headed back to our friends house over in Driggs to rest and get ready for the Grand Targhee Ski Mountaineering Classic the very next day....
In the next couple of days I will post a race report about Targhee, and a post about the equipment I am racing on. If you are reading this and are at all interested in helping me get to Italy and represent the US at the World Championships please leave a comment below and I will get back to you.
Also here are some interesting links, videos and articles about the US Championships:
The race website has links to Powder Magazine's coverage, Outside Magazine, and a couple of YouTube videos.
The Idaho State Journal Wrote this about me. This article was picked up by the Associated Press and has appeared in at least 6 papers/websites in the last couple of days.
And Montana Snowsports wrote this.
There are also upcoming interviews from RestWise, First Endurance, and La Sportiva which I will link to this report when they are published.
Gear I raced on this weekend that I feel contributed heavily to my success:
Boots: La Sportiva Stratos
Skis: Ski Trab Duo Race World Cup, with Trab race binding
Nutrition: First Endurance EFS (fruit punch) and EFS liquid Shot
Posted by Luke at 4:00 PM