The day after the US champs nearly all of the same competitors lined up for the 2nd world qualifying race of the year. I had made the decision early to push hard but to listen to my body as I was convinced that yesterdays race had taken it's toll. 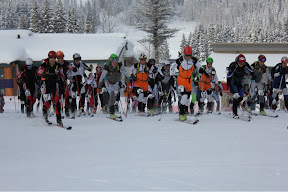 While warming up i felt like my legs were a bit heavy, but responded well to a quick pace. When the gun went off I allowed some of the racers to go out ahead of me. I chose to hold back at a pace I could maintain throughout the race. By the top of the first climb I was in 5th or 6th and feeling pretty good. The pack had broken apart on the climb and descent. The transition at the bottom of the descent went well and I headed out in the mix with the usual suspects. A group of three of us formed a chase pack up the second climb as we tried to reel in Brandon and Reiner. I made a move on the bootpack up Peaked trying to give myself a lead for the descent down the cat skiing territory. I did have a small lead but lost it and more on the descent where the deep heavy snow worked me over. 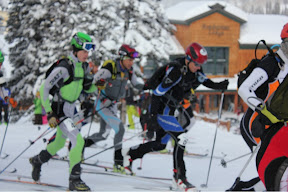 I made a very rough transition and surging from adrenaline charged up the final climb of the race. I reeled in and past a couple of racers and was determined to make up lost ground. Through the haze that had formed from pushing very near max pace I noticed someone right on my tail. It was Travis Scheefer, a very strong racer from Colorado. I told him to hang on and we would try to catch the leaders. We pushed hard passing another racer or two and closing on Brandon and Reiner.

We hit the transition area right on the tails of Brandon, Reiner having left a moment prior. I again flubbed the transition and left right after Travis. I failed to keep pace on the descent but managed to finish 4th. Reiner was 1st, Travis eked out 2nd, Brandon 3rd and I was 4th, with only 52 seconds separating Reiner and I. 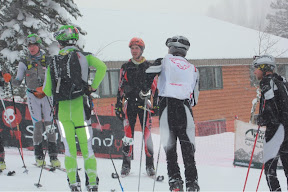 All in all I was very happy with how the day went. My body responded well to the back to back races and seemed to handle the workload well. 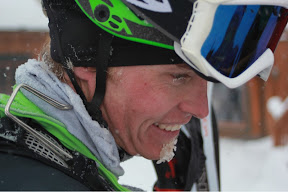 - Posted using BlogPress from my iPhone