A couple of weeks after the US champs and Targhee I made the drive north to Montana to race at Bridger Bowl. I had been to Utah the week before and gotten in some pretty good skiing with the SLC Samurai and Andy Sherpa, as well as zone rowdy luging with Karl Meltzer and a crew of some of the best ultrarunners in the US. I think I may have had too much fun and not enough sleep over that weekend. The previous mentioned coupled with lots is handshaking at the OR Retailer trade show was the perfect recipe for a cold. The whole first part of the week I was struggling with a head/chest cold. At one point I felt I should bag the weekend and not make the drive to race, but of course the Thursday night I started to feel better and decided to at least show up. Friday I hopped in the car, put Aron Ralston's Between A Rock and A Hard Place audiobook in the radio and put rubber to the road.

The book made the 4 and half hour drive go by pretty quick and soon enough I found myself in Bozeman with some time to kill before the pre race briefing. I headed out for a short run to loosen the legs up after the drive.

It was great to catch up to some friends I hadn't seen in a while at the race as well a to hang out with some friends I rarely see outside of skimo racing. After the briefing I went to dinner with Brian and Amy then we headed to the hotel Brian and I decided to share instead of sleeping in our cars. 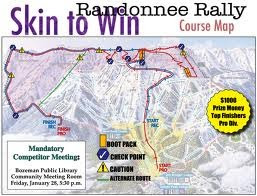 I woke up race morning feeling ok, but not great. During my warmup I felt pretty crappy, which cranked up my nerves. This lead to me attacking very hard at the beginning of the race ( I was unable to hold myself back, which regularly leads to my demise). I held a very hard pace up a little more than half of the first climb, until I had been caught and passed by a couple of racers. Then the head games began. The first part of the first descent traversed the ridgeline and I lost ground on the up/down terrain. Then we dropped into hidden chute which was some great steep skiing. I left the transition in 4th just off of the leaders, but as it turns out I would stay in that spot for the rest of the race. 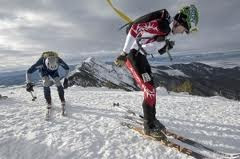 For all the effort I put in I could not reel anyone in and stayed in no mans land all alone ad I struggled through the ascents and descents of the race. Near the end of the race we traversed the ridge for a long time. I was totally blown up and floundered along the challenge terrain. I was grateful to hit the final descent and decided to let 'er rip all the way down. Very near the bottom I was skiing a bit too fast for my legs and ended up going down in a ball of fire as a ragdolled for a hundred yards or so. I collected myself to finish off the race still in 4th. I finished about 7 minutes behind Brandon who had won, Cary Smith was 2nd, Chris Kroger 3rd.

I have to admit I was a bit disappointed with Joe this race turned out, but I think it was related to having been sick and maybe a touch overtrained. A group of us skied together at Bridger the rest if the afternoon, it was a ton of fun to ski with folks that I frequently only race against and realize how talented of athletes they all are. Not only do they race fast but they ski strong even when just having fun. Even though I was bummed about the race it turned out to be a great weekend with good friends
in the mountains.

Video from the race