Over the last several years I have run literally thousands of miles on the trails surrounding Pocatello, Idaho where I live. While running the majority of those miles I was alone or with my trusty training partner, a black lab named Pedro. I have seen a lot of incredible things, including some wildlife. I often am asked if I am afraid of mountain lions or bears, to which I firmly respond no. I generally do explain that I am a bit fearful of the dark (you might laugh but go run a trail at night in the dark and see if you don't "quick step" occasionally from the rustling in the trees) and that I am afraid of moose.

I am not sure where the fear of moose comes from, but I have always been a bit leery of them when I spot them on or near the trail. Well as of Friday afternoon I now know why I was always timid around them...because the are big, unpredictable, and in the case of the one I met down right mean. So here's the story: 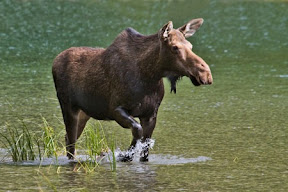 Not my new friend, but you get the idea...photo by Natures Pics

I wrapped up work just after noon on Friday and took the opportunity of some extra time to get in a nice long run. Since the Pocatello 50 is coming up soon I convinced Tanae to drive me to West Fork (race start) and my plan was to run into town via the first 16 or so miles of the course. The weather was great and before long I was ticking off the miles. As ran past the Beaver Ponds on Dry Creek I commented to myself that it was strange that I hadn't seen any moose yet as they tend to be regulars to the ponds. I didn't expect to see anyone on the trails and was surprised to see another runner about 1 and a half miles up from the Gibson Jack Trailhead. The runner was headed the opposite direction, meaning he had just come from the trailhead, so I let my guard down a bit and really started to roll, particularly after I started the last 1/4 mile descent to the TH. I rounded a blind corner and bam! Not 6 feet ahead of me was a moose on the uphill side of the trail, but with her head and neck blocking the trail. It immediately was obvious that I wasn't the only one startled by the situation.

Now take a second to reflect before I continue on. I run a lot, and to most I am pretty much the opposite of intimidating. I am skinny, really skinny and wouldn't be the kind of guy you would pick to be on your side for a fight. So here I am 6 feet away from a 1200 pound animal that is probably 6 or so feet tall, that must have seen me as a threat. I quickly glanced back to see if I had an escape, which I did, but it was ugly...at this point the trail does a couple of quick switchbacks before crossing the swollen Gibson Jack Creek and then a climb up the far bank to the parking lot. Directly behind me was a steep thicketed hillside with few large trees (none climbable) with a deep creek at the bottom. In the half second or so it took me to look behind me and then back to the moose she decided I needed to die, and when my eyes turned enough to see her she made a weird huff, pinned her ears back and was charging. Without delay I turned and leapt off of the trail into the thicket. My pace would have rivaled anything Usain Bolt has ever done mixed with a bit of duck and weave. I tucked in behind a Doug Fir and it was a good move. As my shoulders got behind it, she came through close enough to brush me as she blew past. I didn't let her gain the advantage and shot off behind her and continued my trajectory towards the creek, crossing the trail on my way. 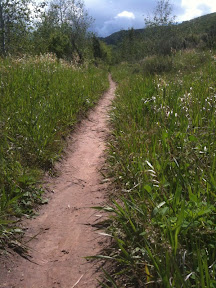 The section of trail just before my "run-in"

I hit the water with a leap from the shore, it was nearly chest deep, but the copious amounts of adrenaline in my bloodstream didn't allow the water to slow me down. As I hit the far side, the angry moose hit the water, it slowed her more than it had me and I was up the embankment and on the trail before she had cleared the creek. I sprinted to the TH where I leapt into the back of a pickup truck that was pulling into the lot (much to the surprise of the driver) as the moose came into the lot. She ran straight through the TH area and up the trail I should have come down. The whole experience lasted a minute or two but felt like an eternity. The truck driver got out and I explained what had gone on leading up to where he joined the story. The moose had climbed up onto the hillside above the trail with the reason she was so aggressive- a calf! I was pretty shaken up, but convinced the guy in the truck I didn't need a ride home and with one eye on the moose ran up the trail away from her. Not ten minutes later I saw another moose, this time from a distance, and I altered my route to get to high rocky ridge lines sooner than I had planned. My nerves couldn't take another race against a moose.

I share this experience with any and all who will read it so that next time you are out you might be a bit more wise about the locals (wildlife) and what to do if you encounter (surprise) a grumpy mother moose. Here is a link that covers moose safety: http://www.outdoors.org/publications/outdoors/2010/learnhow/responding-to-moose-encounters.cfm

I know I did several things that I shouldn't have (#1 surprise mother moose with her calf) but it is something that could happen to any person recreating in moose habitat. The bottom line is that I am glad i am here to talk about it and that moose really are amazing creatures...but I like them more from a distance than up close!