After two days of exploring the classics of Zion the time came to really get down to business. Prior to the trip the Matt Hart had suggested that maybe we go for the whole traverse, I was very uncertain as to whether or not I could even run that far, especially with the miles that were planned prior. I hadn't run more than 21 miles since Wasatch last year. It would be a stretch. When we finished on Friday night I felt much better than expected and rolled the dice, I committed to be all in for the whole enchilada.

Day 3: We were extremely lucky to have the support of Jim from Ultraspire who had volunteered to crew us water at the 35 mile mark and to meet us at the finish to drive us back to entrance of the park. Since we didn't have to shuttle cars/water we got the rest we needed Friday night. We left the hotel at 5 sharp and 30 minutes later we were at the East entrance trailhead. After a few minutes shuffling gear and other necessities we hit the trail at 5:45. It was just light enough to see, everyone was pretty lighthearted to be getting started on what would turn into a fantastic day on the trail. 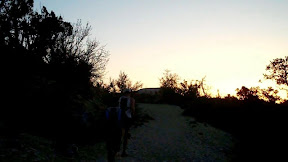 The miles rolled by somewhat uneventfully, with the exception of the scenery which was simply amazing. It was nice to hit familiar territory when we rolled into the junctions with the trails that we had traveled in the day before to get to Cable Mountain, everyone really rolled the descent towards the Weeping Wall TH. In order to complete the traverse we had to run the two miles of road between Weeping Wall and the Grotto, which would have been the low point of the run except for the amazing scenery of Zion Canyon. We refilled water at the Grotto and set to work climbing Angels Landing and onwards to West Rim. 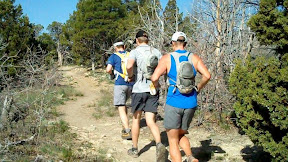 Bruce, Bryan, and Matt ascending towards the West Rim

Up to this point I had been blown away by the scenery of the Zion, but the climb up to and being in the West Rim are so much better than anything else we had seen, simply put I fell in love with Zion on the West Rim. It started to get hot as we topped out so a few of us headed to the west rim springs to refill bottles, we were lucky to run into a couple of backpackers that filtered water for us so we didn't have to risk it or use iodine tabs. We continued to tick off the miles along the West Rim, although Justin and I stopped several times just to take in the stunning panorama just off the trail. The group spread out a bit as the day went on, but we re-grouped at any critical intersection or amazing viewpoint. We passed a group of backpackers just after Potato Hollow, but quickly put them behind us as they were burdened with very large and heavy packs. I can't help but think that they had to have been envious as we cruised by. 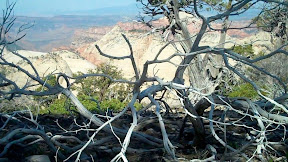 Just a taste of the amazing scenery from the West Rim

After several hours of running we met Jim, who had prepared the most amazing ice water that perhaps I had every tasted. We spent a few extra minutes with him shooting some photos, after all he is a photographer and he had volunteered to come out, it was the least we could do. (hopefully the photos turned out awesome). After half an hour or so we hit the trail again and descended into Hop Valley. The running changed a bit here, it got very sandy. At times very deep loose sand. 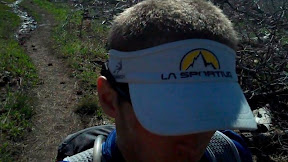 Self shot (sort-of) just before the Hop Valley

Once in the Hop Valley we ran along the and in the river as the trail seemed to follow it's course. About the time I was completely over running on the beach we started the brief ascent and descent to the Verkin River. We ran into another group of backpackers that that gave Justin and I quite the show as they stripped boots etc to cross the knee deep 20 foot wide river that we just ran across. The rest of our group rolled in about half way through the circus and stopped only briefly enough to have a near miss with a flying boot.

On the far side of the Verkin I started to smell the barn, I wanted to push the pace a bit. We rolled until we started to climb towards Lee's pass then progress slowed. There were several river crossings, more sand, and just enough mileage for me to completely bonk about a mile before the trailhead. I hit to gels back to back and almost instantly came around. It was just what I needed to feel strong going into the finish. We finished the 50 mile traverse with just over 10 hours of run time, and a total of just under 12 hours out on the trail. It was great to have finished that traverse and to have burned the amazing vistas that Zion has to offer deep into my memory. After a quick stop at the hotel we hit the local Mexican restaurant and began working on recovery. 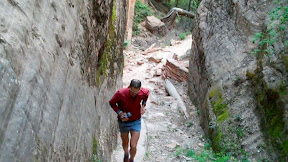 Justin making quick work of the climb into Hidden Canyon

Day 4: I have to admit that I woke up pretty sore from the previous days effort, but I knew it would be helpful to shake the legs out before hopping in a car and driving home. After quite a bit of debate we ended up heading towards Hidden Canyon, which meant once again climbing out of the Weeping Wall Trailhead. We got our latest start of the trip leaving the hotel just after 8. After the shuttle to the trailhead, I found that hammering the climb felt pretty good, so away I went. Justin pulled in right on my tail with the rest of the group tailing back just a bit. We quickly got to the end of the maintained trail, from where the adventure really began. 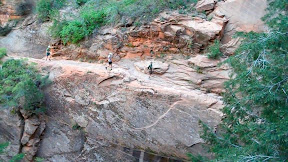 Bill, Matt, and Bryan on one of the primo trails of Hidden Canyon

We pushed our way up the canyon another mile or so until we got shut down by time constraints. It was really fun coming back down with a bit of scrambling mixed with running. Before we knew it we were back at the trailhead waiting for the shuttle. 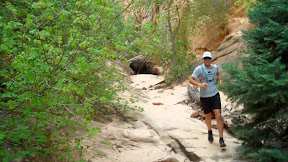 Matt happy to be running in Hidden Canyon

I hadn't quite got my fix so when the bus passed the Temple of Sinawava Trailhead I told the crew I would meet them in a bit (I had packed before we left so I figured I had 30 minutes to spare) and hopped off the bus. I was really interested in seeing the start of the Zion Narrows since I remember my dad talking about them and some of the trips he had done there. I wove through the tourists as I ran the mile path to the start if the narrows which were closed due to high water. I went as far as I could, took a moment to take in the view and the motored on down the path. Just after the bus pulled out it started to run funky, we ended up stopping at a pull out and waiting for the next bus to take us to the entrance. I was then behind schedule, I sprinted through the park entrance to catch a bus that was just pulling out, which took me back to the hotel. I got there 5 minutes before we had to check out, I rinsed off in the shower and with a minute to spare was ready to hit the road.

Overall Vitamin D camp was a HUGE success. We all spent lots of time in the sun (and have the burns/tans to prove it) and got in lots of quality miles. I am certain I will be headed back to Zion before to long, it is too beautiful no to. Huge thanks to Matt Hart for organizing the trip and to Jim from Ultraspire for the amazing support on the traverse.