This past weekend I had one of the best and funniest 4 days of running that I have ever put into that short of time. It all started a few months ago when there was talk of some runners from the northwest needing some vitamin D and out of concern for their well being Matt Hart started working on the logistics. As the time got closer the 4 days were titled Vitamin D camp and through a series of incredible circumstances, including the hospital that I work in moving to a new building, my schedule opened up enough to be able to attend.

Vitamin D Camp Day 1: I left Pocatello on Thursday morning and got to Salt Lake about an hour before the rest of the crew's flight landed. I headed over to the trailhead to start soaking in a bit of sun. The famous Bryan Powell of irunfar.com showed a few minutes before Matt Hart, Justin Angle, Bryan Estes, Bill Huggins, and Bruce Grant rolled up in Matt's van. Just moments later we were heading up the trail towards mt. Wire. The altitude took it's toll on the guys from the northwest, but everybody climbed strong. We took a super fun technical descent back down to the shoreline trail which looped back to the cars. First run down- 8 miles with 3000' of climbing, it was then off to Whole Foods for some lunch and groceries and then the drive to Zion National Park. 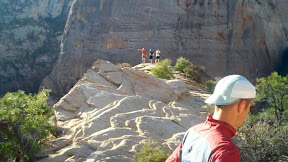 The crew on the top of Angel's Landing

Day 2: We caught the shuttle from our hotel just after 7:00 and headed into the park. First stop was the Grotto and the subsequent ascent of Angel's Landing. We tried to get there early so we could avoid crowds on the technical portion. Our plan worked, we pretty much had the trail to ourselves. We topped out in about 37 minutes, enjoyed the views for a few minutes and then made our way down. We then headed to the Weeping Wall trailhead. 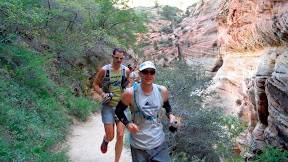 Matt Hart and Justin Angle headed up towards Cable Mountain

From there we first made our way up to Cable Mountain. It was awesome to see Angel's Landing from above. On the way back Justin nearly stomped on a large rattlesnake that was sunning itself on the trail, which in turn upped the pace for the next mile or so as we all had a good surge of adrenaline. It was starting to get hot so we did stop a couple of times to dunk hats and splash cool water on ourselves to try to keep from overheating. As we neared the trailhead we turned out of the canyon and ascended one more time to Observation Point. The group spread out a bit on the climb as we were all starting to feel the miles weighing in. There were a lot more people on the trail at this point and quite a few enjoying the vista. Of all the views of the day I think the one from Observation was the best. 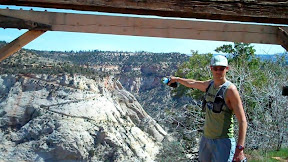 Justin pointing to Observation Point from the structure on Cable Mountain

After all had topped out we put rubber to the road and descended down to the trailhead. We caught the shuttle a few minutes later and headed to the hotel. After nearly 25 miles of running and 6000' ascent I think it is safe to say we all were a bit tired. After cleaning up we headed of to one of the local pizza places and consumed enough calories to make up for the ones we had burned during the day.


- Posted using BlogPress from my iPad