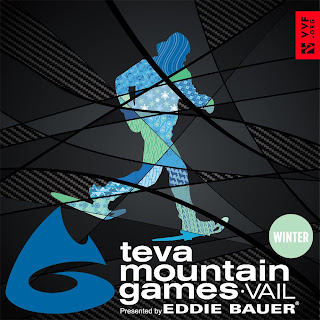 Just two weeks after the North American Skimo Champs I found myself in a very familiar place, on the road in my Subaru.  This time I was alone and driving to Vail, Colorado for the first edition of the Teva Winter Games.  I had signed up to race the Ultimate Mountain Challenge, which consisted of a 10k Skate ski, a ski mountaineering race, and a 2600’ uphill run.  I felt pretty good headed into the race, maybe even a little over confident.  I was lucky enough to be able to stay with Bryan Chojnowski at the condo he is renting in Vail from a Stefan Berkel (head ski patrol at Pebble Creek).  The lodging ended up being a key part of the weekend for me because it was so close to everything going on.  Thanks Bryan!
Day 1 of racing- 10k Skate Ski
I have to admit I have only skate skied a few times in my life and I am not good at it nor did I spend anytime training for this event.  I borrowed some really sweet gear from Ken Newhouse and got a few pointers before the race from Janelle Smiley.  I lined up for the race nearer the back of the pack because I knew that I had no business being in the front.  The 100m double pole start went well, and so did the next 100m.  (200m in to a 10k isn’t very far, but hey small victories!) Just after the 200m mark another race stepped wide just in front of me and managed to break off my left pole (actually Ken’s pole-bummer) about 6 inches up from the basket. I didn’t notice until my next pole plant, when I found myself headed towards the ground because my pole didn’t catch when it was supposed to and I went off balance. 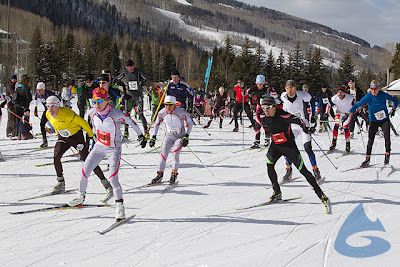 For the second time in 2 weeks I had a slight adult temper tantrum and was faced with 9.8k of racing with the equivalent of a pirate with peg leg that was manufactured too short.  I did my best to get back into the race and as I pushed through various levels of anaerobic hell, I heard a voice behind me asking if i wanted a pole.  It took me a minute to recognize the voice was talking to me and by then a cute Dartmouth Nordic Team member was skating next to me trying to hand me her pole.  I took it and stuffed my hand into the strap that was just a little too tight.  I had 4k to go.  My vision was starting to tunnel in on the hills, but I was catching and passing the occasional racer, I was trying to make up for my awful technique with sheer willpower.  The finish line finally came into view and I dug a little harder to finish strong.  My effort was good enough for 31st place, some 8 minutes behind the winner (who was an olympic nordic skier).  Bryan Smith had the early lead in the overall, he had finished 5 minutes faster than me, I think I was in 11th.  I don’t know what a solid 10k skate time should be but mine was 30:51.
After the race I went back to the hotel, showered, stretched, and then put on running clothes and ran down to the Teva Village to shake out my legs and do an interview. It felt great to shake out the legs.  I went to the pre-race meeting for the skimo race, where we were informed the race would be about 20 miles long with 9500’ of ascent.  They estimated winning times just shy of 5 hours.  I jogged home thinking that a race that long would make it easy to get back the 5 minutes I needed on Bryan to get back in the hunt. I got back to the condo, ate an entire freezer pizza and went to bed early.
Gear for the Day:
Patagonia Speed work tights, capilene 1 longsleeve, houdini jacket
Borrowed Skate gear
Nutrition: First Endurance EFS before the race, healthy serving of Ultragen after.
Day 2- The Ski Mountaineering Race
There were a lot of people at the start, it turns out that this was the biggest race held in the US yet this year.  A guess a little prize money brings people out of the woodwork! When the gun went off I was very surprised at the pace the Bryan Smith was putting down.  A small chase pack formed consisting of Bryan Wickenhauser, Scott Simmons, Greg Ruckman, Marshal Thompson, a young racer from Aspen and myself.  About 2/3 of the way up the climb I fell off the back of the chase pack a little, but felt ok to let them go.  I was really trying to pace myself so that I would have plenty of gas in the tank for the whole race.  All three of the climbs were very very low angle with lots of flat traversing along ridgelines. The descents were quick and somewhat technical.  I passed Greg on the 1st descent, and near the top of the 2nd climb he passed me again.

We went back and forth a few times, but other than that I wasn’t racing against anyone.  Near the top of the 3rd climb I passed the kid from Aspen, and as we started down the descent I passed Ruckman, but Mr. Aspen based me. We pulled into the base of the bootpack together and I hammered to get a little lead before the final descent.  I passed a rec racer in the gates just before the finish line, and crossed in 5th place.  I was disappointed that I hadn’t been in the hunt up front, but felt like I raced as hard as I could given the day.  I finished in 4:06:00 less than 3 minutes back from Marshal who had won on the last descent and almost an hour faster than the estimates.  I was now 5th in the overall 8 minutes back from Bryan Smith who still held the lead. As I have reflected on the race I think that the minimally technical nature of the course was to my disadvantage, as well as racing at 11,000’.  All of the guys on the podium ahead of me lived at least 7000’ above sea level, if not higher.  These are not excuses, I was outraced that day, but may configure into my performance some.
Gear for the day:
La Sportiva Stratos, RSR, RSR binding, Pomoca Race Skin, Crazy Idea Suit, Dynafit pack.
Nutrition: 2 bottles of First Endurance EFS and EFS LS Slurry, more Ultragen after.
Should have worn sunglasses!
Day-3 The Uphill Run
I ran from the condo to the start of the last event, and I was excited.  I thought I would be competitive since I have been running quite a bit for skimo training. As I warmed up I knew it was going to be a very competitive race as I saw faces I recognized from mountain running races in the summer, lots of them fresh and ready to hammer.  From the start I buried the needle and pushed as hard as I could, the lead group stayed together for the first half and then started to string out just a little.  For the life of me I couldn’t get my legs to turn over like I know they can.  I settled into a fast powerhike alternated with running when the slope angle slackened.   I finished 14th just over 2 minutes behind the winner in a time of 34:45.  Keep in mind that we covered 2.5 miles and 2600’ of vertical.  Overall I finished 5th.
I hung out for the awards and enjoyed cheering for my friends that had performed so well during the weekend’s events.  Then Mr, Aspen and I ran back down (brutal on the quads) and I jogged back to the condo to shower and pack for the drive.  Before I rolled out of town I stopped in the Patagonia Store in Vail and said hello to the staff, they were super nice and stoked about the Teva Games being in town.  Then I hopped in the car and put rubber to the road. I started getting sleepy about Grand Junction so I stopped in Fruita and went for about a 40 minute jog to help me wake up and to loosen up my body.  I felt great during that run, something about the air being a little thicker sure felt nice.  The rest of the drive was uneventful and I pulled in my driveway just after 10:00 pm that night.
Gear for the Day:
Patagonia speedwork tights, capilene 1 long sleeve, houdini
Patagonia Forerunner shoe with Hillsound Running Crampons
Nutrition: First Endurance EFS before, Ultragen after.
Overall I feel very happy with how the Teva Games went for me.  I know that I’ll have to learn how to skate ski better before next year, and will be more aware of how to pace for the skimo race.  The organizers did a great job handling the event, and I am already looking forward to going back next year, and heck I might even learn how to skate ski first!
Posted by Luke at 12:26 PM