The last five weeks have been incredible.  The only downfall to how awesome they have been would be the insane amount of travel that has gone on and how busy it has been.  It has been a while since I updated so grab a snack and buckle in before reading what I've been up to.

March 10- Wasatch Powderkeg, Salt Lake City: Last year I won the Powderkeg, I had been in Europe prior and came back very fit.  This year, by the time the 'keg came around I was kind of burnt out.  I started skimo training as early as ever, trained harder than ever, and it happened to be during one of the worst winters ever.  Needless to say I was ready to move on a couple of weeks before the race.  As matter of fact I hadn't even skied since the Teva Games.  I spent a few days out on the splitboard and did my ski patrol work on a snowboard. I had been getting ready for trail run season and enjoying the early season dirt in Pocatello.  The Powderkeg was the first skimo race I did, and I will always try to make it to the race.  The Brakelsburgs do a great job putting on a world class event.  The race itself went well.


I didn't feel amazing or horrible.  During the entire race I was back and forth with the Mr. Consistency-Brian Wickenhauser and the two of us were going as hard as we could to to try to reel in Jason Dorais.  Jason took the win and I was able to sneak ahead of Brian in the last seconds of the race for second.  After the individual the 'keg hosted a relay style sprint event, introducing this style of racing to the Wasatch.  I had a great leg to lead off our team, but we weren't able to hold onto the lead and finished 3rd, I think.


March 16-18- Chuckanut 50k, Bellingham Washington: Thursday night Ty Draney and I loaded in the subaru and started the 15 hour drive towards the northwest corner of Washington for the extremely competitive 50k trail race. We drove to somewhere in Oregon the first night, then finished the drive the next morning.

We had a great dinner the night before the race with Roch, Catherine, Gavin and a few other folks.  I had put together to trip on a shoestring budget so I convinced Ty to camp, then Gavin from Boulder joined us for a rainy night in the state park just off the Chuckanut course.  After a fairly sleepless night spent listening to the rain fall we crawled out of the sleeping bags and tore down the very wet tent.  Rain was the theme of the day as it rained/sleeted until about the last 10k of the race. 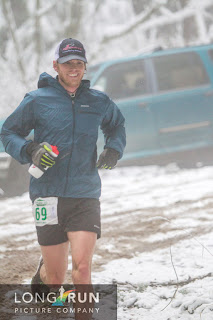 Krissy Moehl had done an amazing job recruiting an extremely deep field to the tenth anniversary of the race and because of the depth it was hard to even predict where one might finish.  I had an incredible race, the first 10k on the bike path were super fast, when we finally got to the single track I was somewhere in about 30th.  I was able to quickly pass many runners as the trail started to climb and get technical.  I kept slowly reeling in runners unil the top of mini-chinscraper, were I was by myself in no man's land.


On the descent back to the bike path I got some great encouragement from Joe Grant, but felt my legs starting to blow up as the trail leveled out.  Joe Uhan caught me early on the bike path and he firmly said stay with me.  I followed his directions and pushed into a little deeper level of hurt.  We cruised along the path slowly creeping up on a few other runners.  We passed a couple of people I didn't know and about a half mile from the finish Joe put the hammer down dropping me as we both passed Scott Jaime.  I finished 19th in 4:08:00, a 30 min 50k PR! Ty and I hung out helping at the race with the Patagonia booth (along with a large portion of the Patagonia Ultra Running Team-which was super rad!) and helping Krissy clean up after the race.  We went to the awards dinner for about a half hour before we decided we needed to hit the road for the drive back.  At 1:00 am we pulled off and got a motel 6 room to sleep a few hours since we were both too tired to safely drive on.  The next morning we hit the road again, after the 10 hours on the road that day we concluded out truck stop world tour and safely arrived home. (Ty dropped me off about 2 hours before he got home-huge thanks to the Vaquero Loco for being a stout co-pilot!!)


March 23-April 3- Idaho Condor Medical Humanitarian Trip, Cusco Peru: I was still exhausted from Chuckanut when my wife and I pulled out of the driveway to start our travel towards Peru.  The girls were in my mom's very capable hands (we flew her out from New Mexico to watch them while we were away).  For the last 3 years I have been heavily involved with Idaho Condor, the last two serving as expedition coordinator for a group of medical and dental professionals that travel to Lima and Cusco Peru to do humanitarian work.  This year our group was 64 people strong, with several professionals, a grundle of pre-med/dent students and a handful of other volunteers.

As the expedition coordinator I do all of the travel and logistical arrangements for the group.  This year our group was divided into 3 teams: a team of 11 who worked in Lima doing maxilofacial surgery, a team of 13 that did orthopedic surgery in Cusco and a the rest participated in a traveling group that provided medical and dental care to 6 outlying communities.

While we were there our medical group treated 1200 patients, the dental group treated 400, the ortho surgery did 18 cases, and the max-face did 11.  It was an incredible trip! Apart from all of the medical work I was able to run for at least an hour every day while we were in the high country.  Cusco sits at just shy of 10,000' and some of the outlying communities we worked in sat above 12,000'! It was also very awesome for me to have Tanae along on the trip.

We traveled for several months in Peru about 8 years ago and it was awesome to be back there with my lovely wife! The eleven days in Peru flew by and before we knew it we were on our flight home.


April 4-7- UltraSpire Athlete Retreat, St. George, Utah: Tanae and I got home Tuesday evening, and Wednesday morning, after washing clothes and repacking, I loaded up in the truck with Evan Honeyfield and my wonderful mother and headed south.  We dropped my mom off at the airport in SLC to fly home and Evan I drove over to Roch and Catehrine's to meet the wagon headed south.  The four of us were joined my Karl Meltzer and Matt Hart and after a bit of complicated loading/rigging we hit the road.  It took a while to get the load settled and stable and after several stops including one at the Scipio petting zoo (not to be missed) we arrived at Ultrapsire HQ for a couple of days of product testing, designing and most importantly running.  It was quite humbling to be surrounded but many of the ultra-runners that I most look up to for the weekend and to be able to fully geek out on running and running equipment.

We tested current product Thursday morning which Joe Grant I managed to turn into about a 16 mile run, had a great lunch then tested prototypes in the afternoon for another 6 miles or so.  That night we spent talking about future product after another fine meal.  Friday we ran 2/3 of the Zion traverse while testing 2013 product for another 35ish miles. 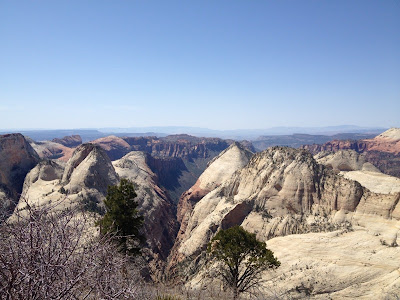 That night we had a killer luau put on by Anna's family  (it was awesome) and then a full on concert put on by some of Ultraspire's finest.  Saturday morning we got out for another hour run before dropping people off at the various shuttles for flights and the wagon loaded up and headed north to SLC.  Evan and I hung around SLC for a couple of hours to go to a party being held for hardpan Jared Campbell in honor of his Barkely finish before we finally hit the road home.


April 8-19- Home, Pocatello ID: Spent two weeks working and catching up from the previous month of madness, good to be home getting back into a routine and putting together some of the details for the upcoming Pocatello 50.


April 20-21-Menan Butte Challenege, Menan ID: We loaded up the family in the truck and drove up to the inlaws house in Rigby the night before the Menan race.  I have been racing Menan every spring for several years.  It is an early season test piece that helps me gauge my fitness, plus I love the race.  It is a tough trail race that has a ton of vertical, some sand, some rocks, and a bunch of great people.

This year the race has a new race director who worked very hard to get the distances accurate.  I entered the longest which was a 25k. I also volunteered to clean the course afterwards to get some extra mileage in the bank.  The race went very well, it was a gorgeous day and I was able to defend my title for the 5th consecutive year.  I finished in 2:15:15 and considering the race was 25k with 4500' ascent and the same of descent I was pretty stoked on the time.

I waited around the base for about an hour before I headed up to sweep the course.  On the way home after the race I enjoyed a very nice soak in the Snake River and then got to spend the rest of the day playing outside with my girls, which put a huge exclamation point on the weekend for me.
Now that things are caught up here on the blog I'll let you know that things are't slowing down and too look forward to more updates in the near future, plus some gear reviews on some of the new patagonia and ultraspire gear that I have been using recently.  Until then happy trails!
Posted by Luke at 8:58 PM