A Quick Trip in the Mountains...Literally

On Friday I finally found the time and managed the logistics to do something I have been wanting to do for a long time, a speed attempt on Mount Borah. Mount Borah is the highest peak in Idaho, at 12,662' is stands proud in the Lost River Range of Central Idaho. The previous ascent record was likely held by the very talented mountain runner Tom Borschel, who several years ago climbed from car to summit in 1:37:00. There was also talk of a nordic skier from Sun Valley having climbed it in 1:32:00. Tom also held the car to summit to car record of 3:05:00. With an ascent in the neighborhood of 5200' in 3.9 miles all of the previous times were fast, going after the record would be no gimme.
Originally I had tentatively planned on attempting this in the latter part of September but due to some lingering issues with my knee after the Wasatch 100 I postponed for awhile. Early this past week I noticed a few hour block of free time in my schedule that coincided with a good weather window. Literally the night before I made the final decision to go up the next morning, I made the arrangements to go see patients in the hospital a couple hours earlier than normal and as soon as I was done I hit the road. A couple of hours later I rolled into the trailhead. I was pleasantly surprised to be the only car in the parking lot. After getting my gear together, I snapped a quick pic with my Iphone of the trailhead sign with the watch zeroed out, I started the GPS and headed out. 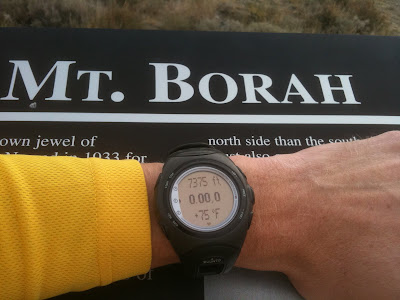 I tried to manage my pace on the way up with out totally blowing up but was definitely pushing right at lactate threshold the entire time. I hit the base of Chicken Out Ridge in just under 50 minutes and figured that I would have a shot at the record. I did get a little off track while pushing through the ridge which cost me a couple of minutes, but once I hit the down climb to the snowfield I really hunkered down and pushed hard to get to the summit as fast as possible. 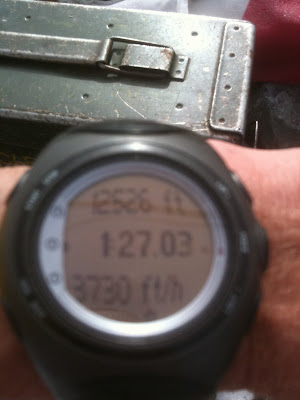 I hit the summit in 1:26:42, and by the time I got my Iphone out of my pack to snap a pic of my watch with the summit register it was 1:27:03. I spent a little over 2 minutes on the top trying to stuff my lungs back into my chest, writing in one of the summit logbooks, shooting a short video and eating a little food before heading back down. 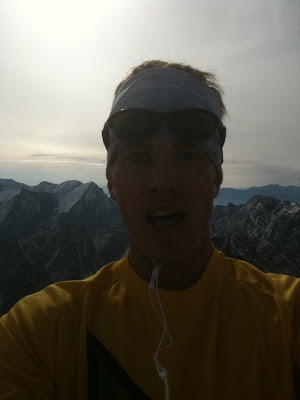 Self portrait on the Summit
I had used Black Diamond poles for the ascent and they turned out being the key to a rapid descent. I hammered pretty aggressively down to Chicken Out Ridge, I then stuffed the poles in my pack and scrambled as quick as I safely could. I ended up off track and low off of the ridge which resulted in a pretty exposed traverse to get back on the route without backtracking. I figure it cost 5-8 minutes. Once below the ridge I was really able to get the legs moving and make quick work of the rest of the descent. 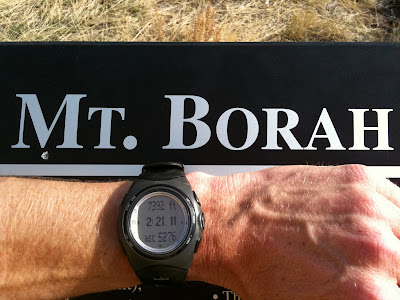 I stopped the watch as I tagged the trailhead sign and spent a few minutes putting my lungs back in my chest for the second time. I snapped a few more pics with the Iphone and another short video, packed things into the truck and rolled down to Mackay Reservoir to soak my legs before driving back home.
I am very amped on how things went. My legs held out well and my knee was totally pain free the entire time. I wore my heart rate monitor for the whole trip and after I got home I was surprised to my HR average was 171 on the ascent and 165 for the whole trip. I had my lactate threshold tested in the early spring and it was 167 then. I would really like to get it tested again because I think I have improved it a bit over the summer. Now it is time to get to business getting ready for Ski Mountaineering Races that are coming up in just over a month from now.
Posted by Luke at 6:56 PM